What's the Devil Got to Do With Blackberries?

Good Monday! How is everyone on this wonderful first day of Autumn? 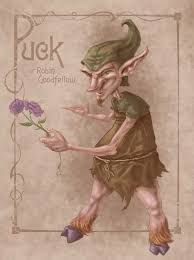 Although we're not having a Medieval Monday book tour right now, I want to share some medieval lore with you on Mondays.


Autumn in Medieval days was celebrated in special ways. Do you know why you shouldn't pick blackberries after Sept. 29?

I tell you why in a blog post I have over at Amber Daulton's today, and I talk about other medieval activities slated for this time of year.

Hope you will stop by and say hi. 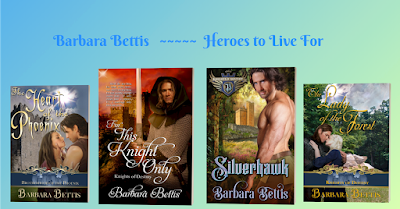 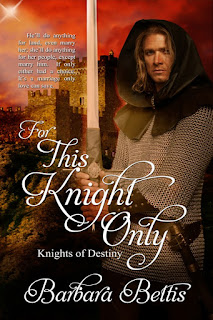 Good Monday Morning. Our Medieval Monday Summer Theme of Villains/Bad Boys has ended and drawings have been held for book winners.

Congratulations, Ilona! Thank you for dropping by my blogs to comment.
I'll see everyone very soon!

And to all of you who signed up for my newsletter as a result of the tour--welcome! I'm so happy you've joined us. I usually send out a newsletter every two months with my news and news of fellow authors, along with contests and prizes.

Posted by Barbara Bettis at 11:15 AM 8 comments 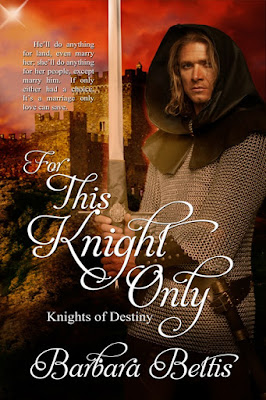 Happy Labor Day, everyone. And welcome to Medieval Monday's last post in the Villain/Bad Boy themed blog tour. Today, each author is posting the last snippet from her chosen novel's excerpt. I hope you've enjoyed the series are much as we all have loved spotlighting them for you.

I've been featuring a section from my latest Wild Rose Press release FOR THIS KNIGHT ONLY. Roark and Alyss's story features a villain fans--and I--have enjoyed over a three-book span. That's the manipulative Sir Paxton. Just to give everyone the full introduction to him, I'm reprinting the entire excerpt from which all the snippets have come.

Next week, I'll announce the name of the winner of the free copy of the book. So be sure to leave your email below with your comment.

In a crisp, star-crinkled midnight sky, haloed by a ring of clouds, the late-winter moon hung low. Shadows spiked across the courtyard, ghostly reminders of the dormant trees from which they slipped. A smaller shadow flicked between them, moving silently toward the castle’s black bulk.

The snap of heel against rock was deadened in the closeness of the cold air, yet it seemed to ring in Sir Paxton of Corbeau’s ears. He flattened against the stone wall, then eased to the edge and carefully peered around the corner. No one in sight.


Why the hell am I trying to hide?  He was a knight returned from a dangerous mission and should be welcomed. No doubt he would be, soon.

Sir Paxton moved quietly in the darkness, nonetheless. Prince John likely had heard of the battle’s outcome by now. The would-be king would want to know why Paxton delayed in reporting.


He’ll have his royal prick in a knot. Well, Hades. I couldn’t travel fast with a slashed arm, could I?

He scratched on the wooden panel, an entry he’d used before, counted to four, then scratched again. After waiting what seemed an eternity, the door opened a sliver, and he pushed his way in. When he saw whom he’d shoved aside— Shite. He dropped to one knee.


Eyelids lowered to a slit, John watched him.  “So I learned not two days past,” he at last said, softly. “Why?”


“Did I ask about your health? I referred to the outcome of the attack.”


Paxton shook his head. He eased his aching arm to rest on his bent knee. “God knows. The plan appeared to work. The king’s party was separated from the rest of the group. The fools actually went hunting. When we attacked, Cantleigh moved his men in from behind, as planned. Then something happened. A noise—a shout. It alerted the king’s men.”

Prince John turned away and walked toward the center of the bedchamber. Candlelight muted the purple and gold of the robe he wore and etched his features, making the nose seem sharper, the intelligent eyes more menacing.  He gestured. Paxton rose and followed.

The chamber was empty but for the two of them. No woman. Surprising for this time of night.  John must have been expecting him.

Flickering light cast the men’s shadows long and narrow against the far wall. Paxton watched as those dark forms undulated in the silence. He caught smells of candle wax and heady perfume, underscored by a trace of body odor and woman’s musk.  So the royal cock hasn’t been alone. No wonder he made me wait so long at the door.

Waiting for the king’s brother seemed to be Paxton’s lot in life. And waiting for him to speak now rated worse than facing a trio of soldiers on the battlefield. He could at least defend himself there.

“Did any of Cantleigh’s men survive?” The sudden sound of the prince’s voice made

“None of those with him.”

Prince John’s pacing ended in front of Paxton, who wove slightly in pain and exhaustion. The prince pointed to a bench near the hearth. “Sit before you fall.”

His mouth pursed, John stared at him. “And what does the king say of the matter?”

“In the confusion of fighting, he couldn’t see the attackers clearly. I suggested someone may have followed from Mainz, people unhappy with the terms of his ransom. The dead carried no identification, just as instructed. Richard is convinced they were outlaws on the prowl for rich travelers.”

Looking smug, Paxton added, “As for Sir Martin and his three, the king believes they died defending him. I, myself, am recovering from wounds at a snug little farmhouse with excellent ale stocked by a charming widow.”

John nodded once. “That is the story, then. Go home. Clean yourself up and rest.”

Paxton had turned when he heard, “You identified Cantleigh?” At a nod, John drawled, “Was anything found on him?”

Incriminating evidence, perhaps? Are you becoming careless in your panic?

“Nothing.” Paxton hesitated. He dreaded to relate this part, but he didn’t dare omit it. “Two of his knights were before me when I came upon the body. One held something. It may have come from Sir Martin.”

“A leather packet? I couldn’t see clearly. I hid until they left.”

“Did you know them?”


“Only Sir Roark, Cantleigh’s captain. The plan didn’t include him. Cantleight said the man had a peasant streak of morality. Has a reputation as a fighter though.”

He paused, eyeing John. He knew that stare, had seen it countless times in the four years he’d served the king’s brother. It made even Paxton edgy. John sat, leaned back in an ornately carved wooden chair, his fingers tented before his lips. For a moment he did not speak, he did not blink, and—Paxton could swear—he did not breathe.

The silence drew out until John murmured, “Pity you were so careless as to be injured. Such an inconvenience. Still, report tomorrow. I have a different commission for you.”

Whether or not he wanted to, Paxton would be there. Time for my reward, Johnny. Oh— so sorry my royal arsehole, ‘ Prince’ John.

Time for a promise to be fulfilled.

The private door had scarcely closed when John stalked into the adjoining room. Shoulders hunched, robe tucked tightly, he walked to a window and stared past his dim reflection

in the wavy glass, out into the moon-frosted garden. The wintering plants lay dead to the look, but spring would see them bloom again. With a little expeditious pruning. Much like his plans.

He’d received word of Sir Jasper’s death from his informant at Windom. Struck down attacking a neighboring castle, the fool. John wanted that land near Nottingham secure, even if he had been forced to leave England. Sir Paxton would do it. Make that Lord Paxton.


John smiled. One problem solved. Now for another.  He needed to retrieve a certain leather pouch. Its contents should have been destroyed long since. He sighed with cynical regret. You couldn’t trust anyone these days.

Blurb:
He’ll do anything for land, even marry her; she’ll do anything for her people, except marry him.  If only either had a choice.  It’s a marriage only love can save.
Sir Roark will do anything to gain land, even beguile an unwilling lady into marriage. He knows she’s much better off with a man to take control of her besieged castle, to say nothing of her desirable person. But it isn’t long before he discovers that, although her eyes sparkle like sunlight on sea waves, her stubbornness alone could have defeated Saladin.

Lady Alyss is determined to hold her family’s castle, protect her people, and preserve her freedom— until her brother’s dying wish binds her to a stranger. Still, she’ll allow no rugged, over-confident, appealing knight to usurp her authority, even if she must wed him. Especially since he thinks a lady’s duties begin and end with directing servants. Alyss has a few surprises for her new all-too-tempting lord.

But when a common enemy threatens everything, Roark and Alyss face a startling revelation. Without love, neither land nor freedom matters.