Judith Sterling Brings Shadow of the Swan to Medieval Monday 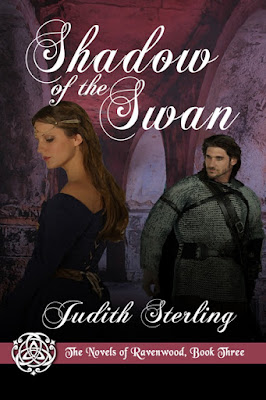 Only four weeks left of the Bad Boy/ Villain theme for Medieval Monday's Summer blog exchange, and the drawing by each author for copies of their books. So be sure to stay tuned--and comment for your chance to win.
Today, my guest is fellow Rose (The Wild Rose Press) author Judith Sterling. Judith's a multi-faceted author, whose Novels of Ravenwood series has received impressive acclaim. And now she shares a look at Shadow of the Swan, Book 3 of the Ravenwood series.
Blurb:
Lady Constance de Bret was determined to be a nun, until shadows from the past eclipsed her present. Marriage is the safest option, but she insists on a spiritual union, in which physical intimacy is forbidden. Not so easy with a bridegroom who wields unparalleled charm! But a long-buried secret could taint his affection and cloak her in shadow forever.
Back from the Crusades, Sir Robert le Donjon craves a home of his own and children to inherit it. From the moment he meets Constance, he feels a mysterious bond between them. When she’s threatened, he vows to protect her and agrees to the spiritual marriage, with the hope of one day persuading her to enjoy a “real” one. She captivates him but opens old wounds and challenges everything he thought he believed.
Two souls in need of healing. Two hearts destined to beat as one.

His eyes and mouth opened wide.  He resembled a fish out of water, and she imagined his mind flipped and flopped in a desperate attempt to grasp the unexpected news.
At last, he spoke.  “When did all this happen?”
She plucked another lie out of the ether.  “During the ride north.”
“That was an eventful ride.”
“Quite.”
“Did the bridegroom also ride you?”
She gasped, then clenched her fists.  “No.”
“Why else would you make such a rash decision?  Then again, you’re prone to those, aren’t you, my dear?”

Be sure to leave a comment for a chance to win digital copies of the first three books in The Novels of Ravenwood series, and follow along next week on Ashley York’s blog: https://www.ashleyyorkauthor.com/blog
You can find Barb's excerpt snipped on Judith's blog today. Please comment for a chance at Barb's latest book. https://judithmarshallauthor.com/blog/
Posted by Barbara Bettis at 9:50 PM