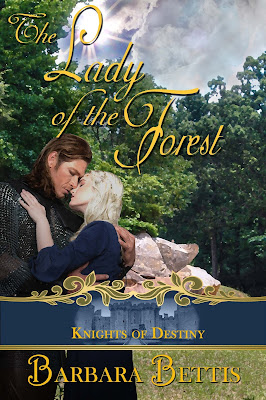 Medieval Monday's winter tour of excerpt blogs draws to a close today with each author posting a final segment of her excerpt on her own blog.

Don't forget to comment on the different blogs for a chance to win a free book. Each author is giving one away.

BLURB:
He must pursue his enemy; she must protect her people. Can their love survive the duties that drive them apart?

When her elderly husband dies, Lady Katherine fakes her own death and disappears into the forest with others escaping the brutish new lord. Determined to protect her people, she knocks the wrong man senseless. But Lord Henry isn’t an enemy, he’s the brother of her childhood friend. Although his tender confidence tempts her, she’s bound by duty.

Henry of Chauvere has found the one lady he wants for his own, never mind she’s tied him hand and foot. When he learns the king has ordered her to wed Stonehill’s ruthless new master, he insists Kate seek haven with his sister. But she won’t desert her friends. Henry vows to solve her problem, provided he catches a traitor before the threat from Kate's past catches her.

When a daring rescue compels Henry and Kate to join forces, their attraction grows into love. If only duty didn’t drive them apart.

“If the new master of Stonehill wants anyone dead, he can do it himself.” The words were sharper than she’d intended, and Jamie fixed her with a worried gaze.

“But you’ll turn him in, won’t you?” His voice hitched.

Her glance took in the prisoner’s face that seemed so familiar. She had no choice. “We must.”

Still looking troubled, Jamie darted out. Young or no, the boy understood the danger they courted. While soldiers combed the area for a stranger, none of her people were safe. But once Sir Mortimer had his hands on the man he wanted, he’d call off his mongrels.

Kate had to believe that. She glanced at the unmoving knight. His mere presence filled the hut’s tiny space. A part of her hoped he wasn’t the culprit being sought.

Pushing away a niggle of guilt at the hope, she went to a small, rough table where a jug of water sat. Filling a small wooden bowl, she considered how long until Sir Mortimer called off the hunt. Oscar or Sam’l would send word as soon as did.

She picked up the bowl and turned, just as a voice boomed. “Who the hell are you?”

Kate jumped, splashing water across her front.
****
If Henry hadn’t been so angry, he’d smile at the youth’s open-mouth shock. But he was angry. And his damned head rang like a benighted gong.
He’d lain quiet, waiting for the pain to fade into a throb. That, and taking stock of his surroundings through slitted eyelids. But enough was enough. He had no time for this interruption.

What did the youth play at, attacking an armed knight? Surely the stripling realized he could have been badly hurt.

The fact that the armed knight now lay bound on a pallet only made Henry more disgusted with himself.

Perhaps his capture didn’t qualify as a prank after all. The two who tapped him on the chin, then trussed him up hadn’t been joking.

“Well?” he demanded. “What have you to say for yourself, boy?”

Struggling to pull off the now-soaked hooded cape, the boy raised his head.

(Poor Kate is in for it now...or is she? Henry's still bound hand and foot. However...
I wish I had space here to continue their story, but despite all the troubles that lie ahead for both, they're find their HEA eventually. Well of course they will! 😊 )

If you'd like to read the rest of the story just comment below--be sure to leave your email. I'll be drawing a name from those who have left a message today and one from those who have commented on my story during the rest of the blog tour. Winners will receive a copy of The Lady of the Forest. Already have it? You'll get your choice of any of my other titles, including my latest, released last month.

Good luck everyone!
Posted by Barbara Bettis at 6:54 PM 2 comments

Ashley York Presents CURSE OF THE HEALER on Medieval Monday 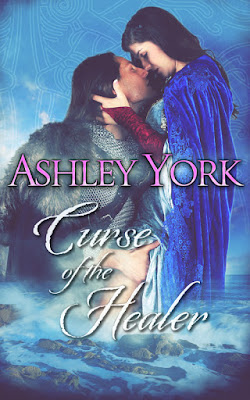 Our Winter 2019 Medieval Monday excerpt blog hops have nearly reached their conclusion.  Next week will see the exchange complete with authors posting the last sections of their excerpts on their on blogs. So be sure to visit me next week and comment for a chance to win a free book.

For my guest today, I am so happy to welcome my friend, the talented Ashley York. Ashley's latest novel is a wonderful tale of an Irish healer and the warrior who will eventually win her trust--and her heart.

(And to catch up on Henry and Katherine's journey to happiness, visit my excerpt at https://www.ashleyyorkauthor.com/blog.)

After the death of Brian Boru in 1014, a legend arose of a healer so great she could raise a man from the dead, with a power so strong it could make any warrior the next high king of Éire...and to steal it away from her, he need only possess her.

Fated to be a healer…

Aednat has spent her entire life training to be the great healer, knowing she must remain alone. When she meets Diarmuid, the intense attraction she feels toward him shakes her resolve to believe in such a legend. If she gives in to the passion he ignites in her, can she settle for being less?

Destined to be his…

Diarmuid of Clonascra is renowned for his bravery in battle. Only one thing daunts him: the prospect of taking a wife. The safest course would be to keep his distance from Aednat, the bold, headstrong healer who's far too tempting for his peace of mind. But his overking orders him to protect her from a group of craven warriors intent on kidnapping her to steal her power.

What starts as duty for Diarmuid quickly transforms into something more. Aednat's power might be at risk, but so is his closed-off heart.

“Ah, dear Aednat. I see only a woman desiring a man’s touch. I am most willing to oblige.”

His low voice sent a wash of goose bumps across her skin. She glanced at his lips and wetted her own. That kiss had been exceptionally pleasant. With the slightest adjustment, she could know his kiss again. Her entire body called for it, but still she hesitated.

“I am a healer.” Her voice sounded far away now, like her ears were stuffed full of straw. A memory of him calling her… something.

“A great healer.” The man’s attention never wavered. He did not touch her again with his hands, but he caressed her with his voice. “And a beautiful woman I find most desirable.”

The warning bells were louder now, her head clearing. He seemed to care about only one thing, but her own desire for the same thing was vanishing like smoke. She glanced around. “Where are my men?”

“Yer men? So ye are not a lass alone in the woods?” He sounded disappointed.

Follow along next week when my final excerpt will be at my own blog www.ashleyyorkauthor.com/blog 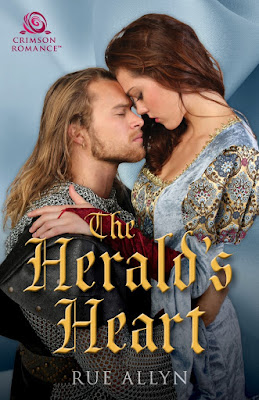 On today's Medieval Monday, the talented Rue Allyn features the First Encounter between her hero and heroine in The Herald's Heart, as this blog series enters its third-to-last week.

If you've been following my excerpts, you find today's at Rue's blog:  https://www.rueallyn.com/blog/

And don't forget to comment for a chance to win a free ebook.
Tag Line: A man on a king’s mission and a woman determined to defeat him. Murder. mistaken identity and love will change everything, especially the Herald’s Heart..

Royal herald, Sir Talon Quereste could never love an overly adventurous, impulsive, argumentative woman of dubious background who threatens everything he values. Lady Larkin Roshan can only despise a man who would deny her identity and steal her heritage. So why has fate thrown them together to solve the mysteries of the heart?

He settled back into the saddle and hauled his mount’s head around. With as much speed as he thought safe, given the lack of visibility, Talon hurried after the dying wail, heartened when he heard it rise again, for that meant he was nearing his quarry.

He moved along, pursuing the noise and the woman until his horse once again refused to move. What was wrong with the beast? 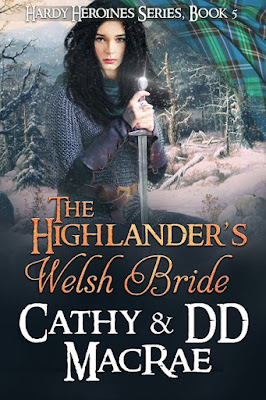 It was over. Prince Llywelyn was dead, his soldiers fleeing before King Edward’s army. Carys, a distant cousin to the prince, herself a princess of Wales, had picked up arms alongside her husband more than a year ago. Now homeless, her husband buried beneath the good Welsh soil, she seeks shelter in the north, far from the reach of Longshanks’s men. Carys and Wales would never be the same again.

It was time. Birk MacLean has been ordered to take a bride and produce an heir. He grows weary of the lasses paraded before him, women of delicate nature and selfish motives. He desires a wife strong enough to help lead one of the most powerful clans in Western Scotland.

One like the Welsh woman sitting in his dungeon, arrested for poaching MacLean deer.

Can Birk convince Carys marriage to him is preferable to a hangman’s noose? And will the heard-headed Scot be worthy of a Princess of Wales?

From the towering Welsh mountains to the storm-swept Scottish coast comes a tale of betrayal and loss, deceit and passion. An epic tale of honor and the redeeming power of love.

EXCERPT:
The man shrugged. “’Tis possible, yet the captain was known to us and an effort was made to discover what happened to him and his lad.” His gaze pierced her. “Do ye know if any others live?”

“The men were all lost,” she replied curtly, not placing thirteen-year-old Tully in the same category. She clenched her fists, digging her nails into her palms against the threatened return of grief.