It's Birthday Week at The Book Corner. For starters, the fabulous Jenna Jaxon is celebrating the release of her latest Regency, To Woo a Wicked Widow. It's the first in The Widow's Club series being published by Kensington. And we're making a book birthday party of it. Just like at all good parties, I'm giving away prizes. On Friday, I'm offering one commenter an e-copy of Jenna's new book. So be sure to leave your name below. 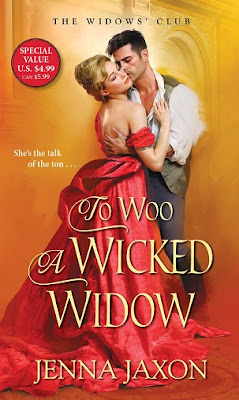 And do check back throughout the week for other tidbits and prizes. Tell you why later. 😄
Let's kick off the festivities with Jenna's Regency. Oh, and if you live anywhere near Williamsburg, VA, here's good news. On March 31, Jenna will have a launch party there. Be sure to stop in to cheer her on and to pick up an autographed copy.  See the picture at the bottom of the post for details.

The war years are behind them.
The future is before them.
And one by one, the widows of Lyttlefield Park are getting restless . . .

Lady Charlotte Cavendish is still the spirited girl who tried to elope in the name of love. That dream was thwarted by her father who trapped her into a loveless, passionless marriage. But now widowed, Charlotte is free to reenter the giddy world of the ton—and pursue her desires. For hardly your typical widow, she remains innocent to the pleasures of the flesh. Yet her life is finally her own, and she intends to keep it that way . . .

Nash, the twelfth Earl of Wrotham, is beguiled by Charlotte at first sight—and the feeling is mutual. When he receives her intriguing invitation to a house party, the marriage-minded lord plans to further their acquaintance. But even he cannot sway her aversion to matrimony, and only with great restraint does he resist her most tempting offer. For unbeknownst to Charlotte, the misadventures of the past are revisiting them both, and bedding her could cost him everything—or give him everything he ever wanted . . .

Lord Wrotham’s big, rough hand took hers, but instead of leading her back to the floor, he made his way to Elizabeth, speaking a word in her ear.

She laughed and nodded, then rearranged her sheets of music.

He pulled Charlotte onto the floor to stand in front of him. “I hope you will not be too scandalized by my request, my lady.” His eyes said he hoped she was and a thrill ran from her head to her toes.

“I doubt you can shock me, my lord.” She raised her chin and stared straight into his coal-black eyes.

“We shall see.” He grasped her hands, the power in his a tangible thing. His touch spread delicious warmth throughout her body. They bowed and Elizabeth began a waltz.

Not exactly scandalous, yet a bold choice. The first figure moved easily, with little intimate contact. Then, in the second figure, his arms were supposed to embrace hers. Instead, they reached all the way around her back until they touched.

He pulled her closer to him, his lips pressed against her ear, and whispered, “And now, my lady? A waltz can be a scandalous dance if your partner is of a mind to make it so.” He pressed her tighter, almost indecently.

Yet she did not struggle. Could not. His big body against her—the hard strength of him leaving nothing for her to imagine—persuaded her that to fight him was futile. She would never be free. Never wanted to be… 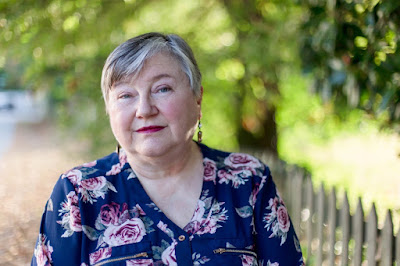 A romantic herself, Jenna has always loved a dark side to the genre, a twist, suspense, a surprise.  She tries to incorporate all of these elements into her own stories. She’s a theatre director when she’s not writing and lives in Gloucester, Virginia with her family, including two very vocal cats.

Jenna is a PAN member of Romance Writers of America as well as an active member of Chesapeake Romance Writers, her local chapter of RWA. She has three series currently available: The House of Pleasure, set in Georgian England, Handful of Hearts, set in Regency England, and Time Enough to Love, set in medieval England and France. This March Kensington Publishing will release the first book The Widows’ Club series, To Woo A Wicked Widow in both print and ebook.
She currently writes to support her chocolate habit.
Find Jenna Jaxon online:
BLOG:  https://jennajaxon.wordpress.com/