NOT A GENTLEMAN
by Loreen Augeri
Read more »
Posted by Barbara Bettis at 10:23 AM 16 comments

For All of Ever: Sherry Ewing's Latest Quest Through Time Novel 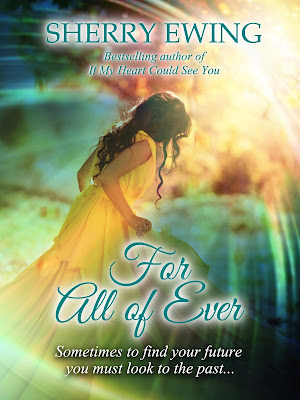 The talented Sherry Ewing is my guest on Medieval Monday's Excerpt Blog Hop, bringing a look at her latest Quest Through Time novel FOR ALL OF EVER. In this installment, Riorden and Katherine meet for the first time--across time.

Remember to comment for an end-of-tour drawing for a free ebook.

I do not know why you have appeared to me, but you must return to the afterworld and leave me be. I can only surmise by your strange garments and the way you expose yourself that you were a loose woman. I have no time to assist you with your unfinished business to save your immortal soul. I am here on important matters for the king.”

There was a short catch in her breath. Was his mind playing tricks with him yet again, or did it appear as if she was attempting to memorize his features.

“Even here, across the span of time, I finally find my knight, only to learn his armor has rusted solid, and he has no place for me in his heart.”

Blurb:
Sometimes to find your future, you must look to the past…

Katherine Wakefield has dreamed and written of her knight in shining armor all her life. Never finding a man to measure up to the one of her imagination, she and her three closest friends take a dream vacation to England. Yet, strange things begin happening while visiting Bamburgh Castle, but how could they have known they’d find themselves thrown back more than eight hundred years into the past?

Riorden de Deveraux travels to Bamburgh answering the summons of King Henry II knowing his past life is about to catch up with him. But nothing prepares him for the beautiful vision of a strangely clad ghost who first appears in his chamber, let alone the fact he begins having a conversation with her.

Centuries are keeping them apart until Time gives them a chance at finding love. But there are obstacles threatening the fragile bit of hope that Riorden and Katherine can remain together. Will the past of one consume what their future may hold, or will Time take the decision from them and hurtle Katherine forward to where she truly belongs?

Read For All of Ever: The Knights of Berwyck, A Quest Through Time Novel (Book One) for #FREE in Kindle Unlimited.

Posted by Barbara Bettis at 1:03 AM 5 comments 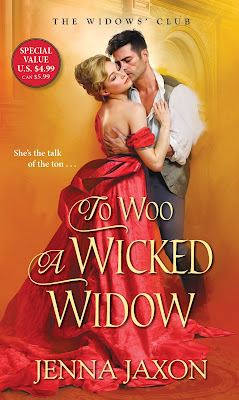 Historical romance fans have lots to be happy for this fall. At the forefront is another delicious release coming from fan-favorite author, Jenna Jaxon. Janna's upcoming To Woo a Wicked Widow is the first in her Widows' Club series. Here's a tantalizing taste of the series debut.

The war years are behind them.
The future is before them.
And one by one, the widows of Lyttlefield Park are getting restless . . .

Lady Charlotte Cavendish is still the spirited girl who tried to elope in the name of love. That dream was thwarted by her father who trapped her into a loveless, passionless marriage. But now widowed, Charlotte is free to reenter the giddy world of the ton—and pursue her desires. For hardly your typical widow, she remains innocent to the pleasures of the flesh. Yet her life is finally her own, and she intends to keep it that way . . .

Nash, the twelfth Earl of Wrotham, is beguiled by Charlotte at first sight—and the feeling is mutual. When he receives her intriguing invitation to a house party, the marriage-minded lord plans to further their acquaintance. But even he cannot sway her aversion to matrimony, and only with great restraint does he resist her most tempting offer. For unbeknownst to Charlotte, the misadventures of the past are revisiting them both, and bedding her could cost him everything—or give him everything he ever wanted . . .

Lord Wrotham’s big, rough hand took hers, but instead of leading her back to the floor, he made his way to Elizabeth, speaking a word in her ear.

She laughed and nodded, then rearranged her sheets of music.

He pulled Charlotte onto the floor to stand in front of him. “I hope you will not be too scandalized by my request, my lady.” His eyes said he hoped she was and a thrill ran from her head to her toes.

“I doubt you can shock me, my lord.” She raised her chin and stared straight into his coal-black eyes.

“We shall see.” He grasped her hands, the power in his a tangible thing. His touch spread delicious warmth throughout her body. They bowed and Elizabeth began a waltz.

Not exactly scandalous, yet a bold choice. The first figure moved easily, with little intimate contact. Then, in the second figure, his arms were supposed to embrace hers. Instead, they reached all the way around her back until they touched. He pulled her closer to him, his lips pressed against her ear, and whispered, “And now, my lady? A waltz can be a scandalous dance if your partner is of a mind to make it so.” He pressed her tighter, almost indecently.

Yet she did not struggle. Could not. His big body against her—the hard strength of him leaving nothing for her to imagine—persuaded her that to fight him was futile. She would never be free. Never wanted to be…

Posted by Barbara Bettis at 10:47 AM 5 comments

Judith Sterling Visits Medieval Monday With SOUL OF THE WOLF 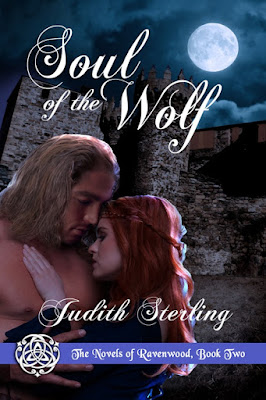 Help me welcome the talented Judith Sterling to Medieval Monday for Week Seven of the Excerpt Blog Hop. Judith brings us Soul of the Wolf,  Book Two of her series, The Novels of Ravenwood.

Excerpt
Time stood still as they regarded one another in silence.  At last, she blinked.

She cleared her throat.  “May I ask a question?”

He dropped his arms to his sides.  “You may.”

“The language you were speaking...’twas Saxon?”

He nodded.  “Did you understand any of it?”

He raised his eyebrows.  She was shockingly perceptive.  Caution was crucial.  “Aye.”
Her eyes narrowed.  “How do you know?”

And be sure to check out Judith's next installment next week when she joins Nicole Locke:
http://www.nicolelocke.com/

Blurb
A Norman loyalist, Lady Jocelyn bristles when ordered to marry Wulfstan, a Saxon sorcerer. She nurses a painful secret and would rather bathe in a cesspit than be pawed by such a man...until her lifelong dream of motherhood rears its head.

A man of magic and mystery, Wulfstan has no time for wedded bliss. He fears that consummating their marriage will bind their souls and wrench his focus from the ancient riddle his dying mother begged him to solve. He's a lone wolf, salving old wounds with endless work. But Jocelyn stirs him as no woman ever has.

Their attraction is undeniable. Their fates are intertwined. Together, they must face their demons and bring light to a troubled land.

Posted by Barbara Bettis at 1:12 AM 2 comments