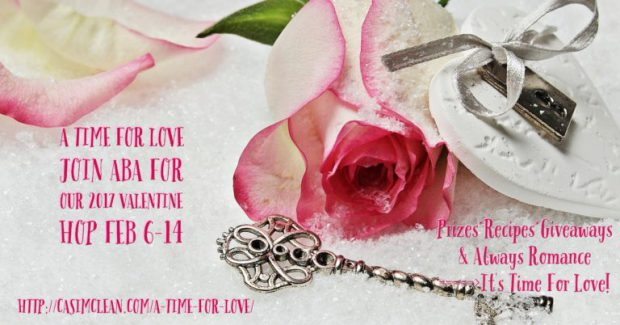 Welcome to the ABA Valentine Hop and a chance to win one of TWO $50 Gift Cards. Simply enter the Rafflecopter, link below. At the end of my post, you'll find the next stop of the Hop! Good Luck--and Happy Valentine's Day.
Valentine’s Day.💘 Time for romance, for flowers, candy, cards. Seems like that traditional day for love has been around forever, but when, exactly, did that tradition start?

I wish I could give you a summarized, sanitized, glamorized answer, but...I can't.

Tradition says the day was named for Valentine, an early Christian saint. Trouble is, the church has records of three martyred priests named Valentine—unless, of course, the same Valentine was involved in more than one of the stories. That could be possible, but no such connection has been officially made. So let me just share with you some of the tales.

All three men lived during the reign of Roman Emperor Claudius II in the third century. One priest named Valentine was martyred in Africa. He’s not so much connected with our tale. That leaves Valentine, a priest in Rome, and Valentine, Bishop of Terni.

One of these two Valentines, while imprisoned, is said to have 1.) cured his jailer’s daughter of blindness and/or 2.) fallen in love with her. Whatever the reason, he is said to have written her a letter on the eve on his execution, signing it “your valentine.”

Both Valentines are said to have been martyred on Feb. 14 (different years). Since the church usually celebrated a saint’s birth or death, that date of martyredom became common. Thus, the name, St. Valentine’s Day.

But what about the romantic nature of the holiday we're so familiar with? And is the date of the priests’ deaths the only reason to settle it in mid-February?

Some reports link activities of what we know as Valentine’s Day to a Roman festival of Lupercalia—held Feb. 13-15. At that time, pagan priests would soak skins in the blood of a sacrificed goat (symbol of fertility) and with it slap women (and fields) to encourage fertility. Then men would draw women’s names from a bowl for their mate during the following year.

Perhaps an early pope linked the Christian observance to this pagan one, encouraging the adoption of Christian belief. Some sources say so. Ironically, other sources are vehement that it Wasn’t So. (It does make a good story, though.)


This all happened in the third and fourth centuries, the early days of the Church. How, then, did Valentine’s Day evolve in the later Medieval world of the British Isles? Oddly, it may have been linked to early spring mating of birds, a belief popular in many rural areas.

Jack B. Oruch says the pairing of romantic love and Valentine’s Day was first recorded in Geoffrey Chaucer’s Parlement of Foules (1382). The poem celebrated Richard II and Anne of Bohemia’s engagement contract in 1381. (They were married at age 15.)

“It says: For this was on seynt Volantynys day
Whan euery bryd comyth there to chese his make.

Trans:"For this was on St. Valentine's Day, when every bird cometh there to choose his

Feb. 14 seems early, but as Oruch says, "On the Julian calendar in use in Chaucer's time, 14 February would have fallen on the date now called 23 February, a time when some birds have started mating and nesting in England.(Wikipedia)

The first actual recorded ‘Valentine’ (that has been found, at least) is attributed to Charles, Duke of Orleans, who wrote it to his wife about 1416 while he was imprisoned in the Tower of London after his capture at the Battle of Agincourt. Here is the first couple of verses:

Perhaps the first ‘found’ written Valentine sentiment was in French, but English wasn’t far behind—and from a lady, too. In the 15th Century (the earliest discovered so far) came Margaret Brewes’ letters to her future husband, John Paston, “my right well-beloved valentine.”

They are part of the Paston Letters collection. A link to the entire letter is below.Well, there you have it.

We can’t really be sure exactly for which Valentine the day was named, or even how the romantic element of it persisted and grew over a thousand years, from the time of the Sts. Valentine martyrdoms, to Chaucer’s mention of the day in a romantic context in 1382, to the 15th Centruy and Duc d’Orleans’ Valentine to his wife and an English lady lady to her betrothed.

Perhaps it just goes to show the enduring need to celebrate the feeling that binds us romantically to another.

But you know, the idea of romantic love goes even further back—to Greek mythology—to that arrow-wielding god Cupid and his mortal lady, Psyche, and a love that transcended time. But that’s another story.

Here's a list of the Valentine Hop Authors. Be sure to stop by their varied and entertaining blogs--and  enter the Rafflecopter for one of two $50 Gift Cards.