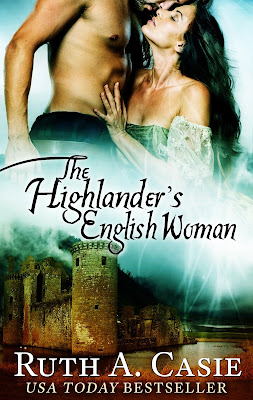 I'm pleased to welcome Ruth A. Casie to the Medieval Monday 'Villain' Post Hop with Excerpt Four from The Highlander’s English Woman.
If you'd like to take a peek at last week's installment to refresh your memory, here's the link:
http://www.laurel-odonnell.com/blog.html
Excerpt:

“The rain has stopped. Would you care to take some fresh air in the garden?” Jamie presented his arm. Laura answered by looping her arm through his and drew him out the door.


He went willingly. Her warmth chased away any lingering chill from his journey. She’s Richard’s little sister, a warning voice whispered in his head. He took a breath and led her to the garden door.

“I understand you’re skeptical of Lisbeth’s gift, but she told me she saw Richard’s death before Bryce carried... brought Richard home. Now, she blames herself for not taking action.” Laura sighed heavily. “Everyone blames themselves. Father shouldn’t have let him go, not that he could stop Richard. Mother should have seen this coming, not that she could. And Lisbeth...”

Follow along next week by checking out Mary Morgan’s blog for excerpt #5 http://www.marymorganauthor.com/blog

Laura Reynolds is in love with her long-time friend, Jamie Maxwell Collins. She adores his playful sense of humor, caring nature as well as his strong sense of family and honor.


Jamie lives across the border in Scotland. Outwardly carefree, he hides a dark secret. He can’t involve Laura in this deception. He can’t give her hope for a future together.
Laura stumbles upon Jamie’s secret. In her heart of hearts she knows Jamie is innocent. Their relationship in tatters and with no hope of reconciliation, she plays a deadly game to exonerate Jamie, she agrees to a political marriage. She has no idea the entire game has been orchestrated by her future husband, Jamie’s greatest enemy.
Available at Amazon

Posted by Barbara Bettis at 12:29 AM 1 comments

Is Betrayal Ahead for Cathy MacRae's THE HIGHLANDER'S FRENCH BRIDE? 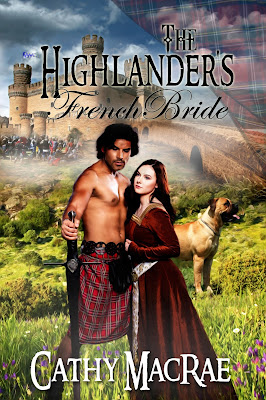 The Medieval Monday Post Hop continues with its Villain theme, featuring the third excerpt from Cathy MacRae's THE HIGHLANDER'S FRENCH BRIDE. (If you would like to reread the second excerpt, check out  Laurel O’Donnell’s blog from last week:)
EXCERPT:
Sometimes betrayal is closer than you think
“I brought her back for you to raise.”

Melisende cast her a startled look. “You cannot be serious.”

Lucienne bent to unlace Arielle’s gown. “You mean, why would I trust you with my child after you failed so miserably with me?”

“Lucienne! That is not what I mean at all. How can you think of giving up your child?”

Tugging the travel gown over the little girl’s head, Lucienne quickly replaced it with a thin undergown with a plain drawstring at the neck. “There. Hop into bed. It is time you were asleep.”

Obediently, Arielle climbed onto the thin mattress as her mother pulled back the blanket.

Lucienne tucked her in and placed a quick kiss to her forehead. “Someone will come for you in the morning.”

Follow along for the next excerpt on Mary Morgan’s Medieval Monday blog Feb. 27!


Blurb:
Heir to a lairdship, Kinnon Macrory is driven to prove his worth by fighting the English on the battlefields of France. His dreams of heroic valor are destroyed by the realities of war—the atrocities visited by fellow soldiers on the very people he is sworn to protect. Three years in a French prison for a crime he did not commit leave Kinnon longing for the one thing of beauty in his war-torn life—a young woman of great kindness and wisdom named Melisende.

Melisende de la Roche struggles to stay one step ahead of soldiers who would imprison her for helping an injured Scotsman wrongly accused of treason. She finds refuge in her uncle’s shop—until a chance encounter sends her fleeing into the unknown once again, haunted by the beguiling friendship with the troubled young Scotsman she is certain she will never see again.

Determined to find the woman of his dreams, Kinnon returns to France, only to discover nothing more than a trail of clues to Melisende’s whereabouts. Their reunion will open the doors to passion, but half-truths and lies from the past could destroy the one thing they both are willing to fight for—each other. 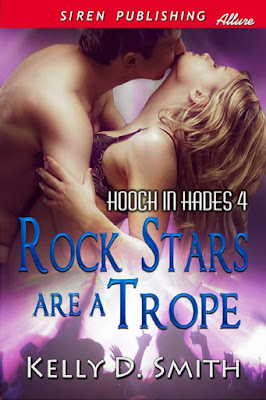 Kelly D. Smith is celebrating the release of her latest novel this week. ROCK STARS ARE A TROPE is the fourth in the Hooch in Hades series, which follows members of a rock band called--Hooch in Hades.

"This book follows Nate, drummer of the famous rock band," Kelly said. "Although part of a series, each book is a stand alone, and follows a single bandmate as they find love."


EXCERPT'
“How’s work?” she asked, trying not to give away that she was prying.

“It’s been slow, but that’s not always a bad thing.” He eyed her carefully.

The elevator dinged, and the doors opened. Both Gabby and Nate stepped off the elevator and fell into pace together, but she made sure that he was leading the way because she had not a clue where she was going.

It didn’t take long to get to a door that Nate unlocked and opened. He set Gabby’s suitcase down by the window.

“Wow.”  Gabby stared out the window, her eyes widening at the scene in front of her. The lights lit up enough for her to see almost everything, but the dark made it prettier. I can’t believe I’m in England.
“Why did you do this?”

“Why did you do this for me?” Gabby turned to look at him, waiting for an answer.

Her heart dropped. Gabby stared at him, trying not to show her hurt.

He stared at her, slightly taken aback based on the look that crossed his face. He looked away quickly.

He said it so softly she hardly heard it. Gabby crossed over to him and touched his back softly. He stepped toward her, still facing away from her. Gabby didn’t say anything. She just stood there, her hand against his back. She tried to figure out if she should say something or not, but she couldn’t think of anything worth saying, so she just kept her trap shut. A few seconds passed but not long until Nate turned and gave her a smile.

“I’ve got to admit I don’t have a lot of time to hang out with you, but I figured I could at least bring you out here, and we could spend some time together, and then Paige and Kenda would love to hang out, I’m sure. If you don’t mind hanging out with them.”

“No, not at all.” It wasn’t quite a lie. She wanted to hang out with Paige and Kenda. She was just nervous to do it. From what she could tell, Paige and Kenda were best friends. Although Paige had been really nice to her when it was just the two of them, she wasn’t sure she would be with a friend around.

Don’t worry so much. Paige doesn’t seem like that kinda girl. Trying to shove the thought out of her mind she padded over to the bed and sat.


“Does that mean I won’t get to spend much time with you?”

Gabby bit her lower lip. She nodded, not liking his answer but understanding it.

A smirk spread over his lips. “See this is one of the reasons I love you.”

His words shocked her. Gabby snapped her head up, and she stared at him with wide eyes. Had she just heard that right?

Nate’s eyes were wide as he stared at her. “I mean…” He struggled to find words, looking scared.

Nate ran his fingers through his hair with a sigh. He refused to meet her gaze. She wasn’t sure what to say next. Just play it cool. Pretend it didn’t even happen. She cleared her throat.

“So, you’re not going to take me sightseeing.”

“I’d love that.” Maybe a little girl time would be good for her.

Gabby Denis, a struggling fashion designer, is not stupid. There is something off about Nate Cooper. She just doesn’t know what it is. Not many men are willing to take a girl out shopping and pay for her new clothes. She’s also never been out with a man who seems to have women recognize him. Or one with friends that need a formal dress made. Of course, she doesn’t turn down the chance to make it!
Gabby likes Nate for who he is, not because he lends her a car and pays for some of her things. For the first time in ages, she meets someone who supports her, and she genuinely enjoys his company. But he never tells her what he does for a living...until she sees him on the front page of the news.

Although, for Gabby, rock stars are a trope from movies and romance novels, she's going to have to decide if she's willing to give a real life one a shot at loving.

Kelly D. Smith is a 21 year old romance writer from Canada. After being homeschooled all her life she got her GED and has been pursuing her passion- writing- with the hopes of turning it into a full time career.
Smith is a personal improvement junky and loves excelling at challenges. She is a country girl at heart and loves spending the day outside with her 3 dogs and the cat!
FIND Kelly at:
Facebook | Twitter| Goodreads

Posted by Barbara Bettis at 12:01 AM 1 comments