Time to Travel: New Season of Medieval Monday Launches with THE LADY OF THE FOREST 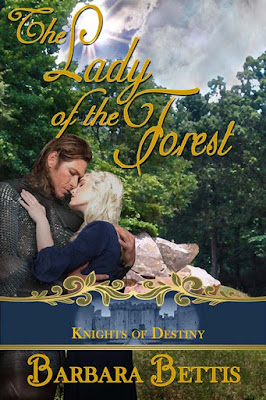 Welcome to the Fall Season of Medieval Monday. We begin the new theme of Travel with a look at one of our own books. Most novels deal with journeys of one kind or another--often more than one journey. This time Medieval Monday looks at events that take place during physical travel of our characters.

I'm excited to spotlight my upcoming release THE LADY OF THE FOREST, which is due out Oct.28! It's a 40,000 word novella featuring Lord Henry and Lady Katherine's story.

“Tell Kate to take no chances until I return.” From the downturn of Jamie’s mouth, Henry gathered how well she’d follow such advice.

“Hold.” Jamie trotted forward. “Guards patrol along here ever’ day. Don’t know if they been by yet, but you stay just inside the trees. There’s a path runs along the road. Won’t nobody see you. The crossroad’s on further, a bit.”

“My thanks, again.” Henry pinned him with a stern gaze. “Have a care for yourself.”
Before the youth clambered back into the trees, he flashed his jaunty grin. This time, the smile contained a trace of sadness.
Kate’s problems remained on Henry’s mind as he rode, but without all the facts, he couldn’t devise a plan of action. Of his own circumstance, he suspected Sir Mortimer played a double game, although why he pretended to believe Paxton was Henry remained unclear. Perhaps he sought power by supporting a usurper. More than likely, he played a waiting game, to see which outcome presented more opportunity.
Travel through the brushy roadside leveled into a slow, monotonous lull, during which he devised a variety of options for dealing with Paxton. His mind grappled with one of those plans when a disturbance, a sound, alerted him.
He reined in his mount and listened. Silence. It came again. A series of faint, sharp bird calls. Only a bird called Jamie could emit such a frantic warble. An emergency, indeed, to have sent the youth after him.
Henry urged the gelding around and started back. A score of steps later, the calls sounded from just ahead. Movement to his right sent him in that direction. The boy came into view, stepping carefully onto an almost-bare tree limb.
“What’s wrong?” Concern turned Henry’s tone sharp as Jamie jumped to the ground.
“I feared—I’d not catch you.”  Tight lines etched the youngster’s face. “It’s Cade and Oscar. They’re following.”
Henry swung down beside him. “Have they been harmed?”
Jamie hung his head and gasped for breath, hands on his knees. “Nah. But awful ole Hawise… she saw Cade leaving…and sent up a shout. Said the lad that…freed Oscar...were the dead Lady of Stonehill. You gots to help ’em.”
“How far back are they?” As he spoke, he took the boy’s arm to help him sit.
“A ways. I ran ahead to catch you.” He heaved in a lung-full of air and blew it out, then flattened
a hand to his chest. “For awhile I thought my heart would get here a’fore me.”
Kneeling, Henry ruffled the boy’s hair. “You did well. Stay here and rest while I go for them. Are Sir Mortimer’s men following?”
Oscar nodded, his unruly curls flopping into his eyes. “But they’re going the wrong way for now. Cade took the south road ’till she could double back without ’em knowing.”
“How could they not see her?”
The boy snorted. “She knows shortcuts better’n any old guard that don’t gets off his behind. And Sir Mort never bothered to learn nothing about the land nor the tenants since he come. He only cares what he can pry out of ’em.”
He gulped another breath. “See, Maddie caught up to me in the woods. She could leave, ’cause nobody never pays attention to a kitchen helper. I waited at the hut ’till Cade got there.”
Henry’s heart thudded at the thought of Kate being chased by soldiers. “Is she unharmed?”
“Said so, didn’t I?”
The boy’s spirit was bouncing back. He’d be fine. But Cade…Kate. He hoped they were near. “Do they have horses?”
Jamie nodded. “Cade had’em hid. They’ll be slowed down in the woods. That’s why I came after you.”
“You did the right thing. I’ll find her—“
“Cade said stay here, they’d come to you. If you gets lost in the forest, we’d have to go looking.”
True. He hated to admit it, but traipsing through unfamiliar countryside might cost unnecessary time. Inactivity grated on his nerves, but he had little choice. He paced a circle around the tree Jamie leaned against until restlessness became too much. Bedamned to an unknown landscape. Kate might be in trouble.
“I’m going back,” he announced.
“No need.” Jamie nodded toward the trees. “They’re coming.”
Two figures on horseback broke through the underbrush, but Henry saw only the blood splashed down the front of Kate’s tunic.

BLURB:
He must find a traitor; she must protect her people. Can their love survive the duties that drive them apart?
When her elderly husband dies, Lady Katherine fakes her own death and disappears into the forest with others escaping the brutish new lord. Determined to protect her people, she knocks the wrong man senseless. But Lord Henry’s not an enemy, he’s the brother of her childhood friend. Although his tender confidence tempts her, she’s bound by duty.
Henry of Chauvere has found the one lady he wants for his own, never mind she’s tied him hand and foot. When he learns the king has ordered her to wed Stonehill’s ruthless new master, he insists Kate seek haven with his sister. But she won’t desert her friends. Henry vows to solve her problem, provided he catches a traitor before the threat from Kate's past catches her.
When a daring rescue compels Henry and Kate to join forces, their attraction grows into love. If only duty didn’t drive them apart.
BUY LINK:  http://amzn.to/2czF6Fl    It's up for PRE-ORDER right now!!
Posted by Barbara Bettis at 1:11 AM 13 comments