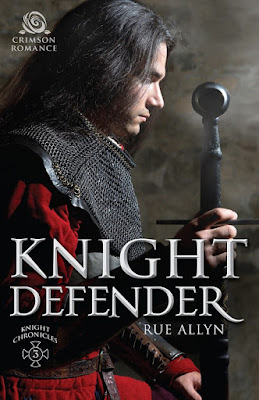 Rue Allyn has a treat for us on Medieval Monday with an excerpt from her exciting Highlander novel, Knight Defender. She describes her Conflict scene as "His, Hers, Theirs." So if you love a stubborn but alluring hero and a spirited heroine, settle back for a tempting read.

Excerpt:
Mid-April 1295, the northwest coast of Scotland
“Unhand me.” She pushed against the massive chest and writhed in the arms cradling her body.
He gathered her closer, mashing her cheek against him.
For an instant, his blazing gray eyes held her spellbound as tightly as his strength gripped her body. Unable to look away, she shivered, but not with cold. The odor of damp wool and man nearly drowned her. All sound faded away save her own harsh breathing.
“Ho, ho!” His chuckle was impossible to miss. “So you are no dying, are you then? Well liars and deceivers must suffer the consequences of their actions.”
She refused to be intimidated. She forced her head away from him. “Is rudeness the customary greeting for your guests, Baron MacKai? I’ve a mind to refuse to wed you. Then King Edward will decline to pay you rent for docking his ships in your excuse for a harbor.
“You think you could resist me?” More chuckles shook his chest.
“It would be a small matter to deny an oaf such as you.”
Flames of some inner fire shone in his unyielding stare. She was unfamiliar with fear, but what else twisted in her belly and skittered just beneath her skin? She wanted to deny his effect on her but in all honesty could not.
“I could make you beg.” He growled low, like some big cat poised to pounce.
“Never.” She could be honest with herself about her body’s betrayal, but she’d plenty of reason not to give the churl any hint of her weakness.
His forward motion halted, his head dipped then stopped a finger’s width from her face. His gaze bored into hers.
Her breath froze at the frenzy of emotions she saw there. ‘Anger, threat, resentment, and something she could not identify. She refused to care. Her fingers itched to slap him, and she raised her hand.
“I wouldna, if I were you.” He anchored her hand beneath a brawny arm and started walking again.
“You’ll regret insulting me.”
His brows rose. “We’ll see about that. For now, I need you safely stowed away.”
“Stowed away!” He made her sound like bothersome chattel, useful for only one purpose. She squirmed and finally released her outer hand from his hold to beat her fist against his chest. “Beast! You will treat me with the courtesy and respect due a lord’s daughter.”
He made no response other than to quicken his pace.
She hit him harder. “You and your entire cowardly clan will rue this day.”
He stopped abruptly and shifted his grip. Her feet fell downward but found no purchase on solid ground. She hung suspended from the large hands thrust under her armpits. The heels of those palms pressed against her breasts, and heat flooded her body at the intimate touch.
“You, you …” He and every other MacKai disgusted her beyond words. Raising her head to berate him further, she stilled. Once more, the gleam in those stony eyes compelled her attention. The downward tip at the outer corner of his lids gave him a slumberous appearance belied by glints of indecipherable emotion. Those deceptive lids narrowed. She longed to hide but could not look away.
“Listen to me.”
His quiet words slid over her skin, causing a rise of goosebumps.
“You are naught but a troublesome woman. You have no power or authority here, so if you value your overly pampered English hide, you’ll no insult clan MacKai. Do you understand?”
She swallowed and nodded.
“Excellent.”
He tossed her over his shoulder, secured her legs against him with an arm, and continued walking.
“How dare…”
One of those huge palms smacked her rump.
“Oooo! I’ll make you regret you ever touched me.”
A second smack was followed by an order for silence.
Since her backside began to throb, Jessamyn subsided in favor of plotting retribution. She’d start with boiling in oil followed by a sound beating and end with banishment.
She was deciding whether or not to add tar and feathers when she heard the creak of leather hinges. They crossed a doorway, and she went flying through the air to land in a heap, face down on a feather bed.
“Dry clothing will be brought. Dinna imagine I care for your comfort. I simply canna be bothered to find another woman if you catch an ague and die.”
She struggled to right herself, sputtering and pulling her hair from her face. The brute deserved the sharp side of her tongue. She gathered breath as she turned to speak, just to see the coward disappear and the door bang shut behind him.
He was not getting away that easily. She leapt from the bed, ran for the door, and nearly jerked her arms from her shoulders when the wooden barrier refused to budge at her angry pull.
Dumbfounded, she could only stare.
He’d barred the door? Boiling oil and banishment are too good for him. I must see him drawn and quartered.

Baron Raeb MacKai is done allowing himself and everyone he loves to live in poverty and despair. His betrothal to a wealthy English heiress will solve a decade of problems. He will do everything necessary to defend his home and his country, but can he defend his heart? 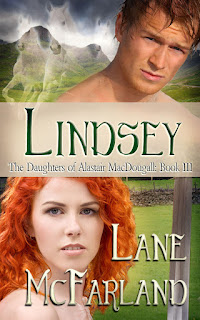 My friend Lane McFarland guests on Medieval Monday today with a Conflict excerpt from LINDSEY, Book 3 in her Daughters of Alaistair MacDougall series. I love all the ‘Daughters’ but Lindsey is very special. If anyone can come up with a way to spring a Highlander from English captivity, it’s Lindsey.

EXCERPT:
The beefy guard waved his torch toward the back of the room. “Them’s the beggars goin’ to trial.”
Twisted shapes of four men, their wrists shackled to the wall and their feet barely touching the floor, came into sight.
Lindsey’s chest tightened as if bands squeezed the life from her. “They’ll have to be cut down, sweets. They cannae eat or git fixed up hanging on the wall.”

The man swung his head toward her. His lip curled.
Her pulse pounded in her ears, and she trembled with rage. She wanted to pounce on him, grab his blade, and sink it into his gut. Straining to gain composure, she turned her back on the men and set her basket on the floor. Her hand trembled as she inhaled the putrid air and struggled to calm her nerves. She must maintain her heartless pretense, appear untouched by the savagery. Biting the side of her lip, she rummaged through the jars and extracted the healing salves.
Chains rattled behind her. Thumps of dead weight and groans indicated the guard had freed the men. As he marched from the cell, he cast a look at Lindsey and slammed the door. The lock clunked, and his booted footsteps grew quieter as he strode away.
Several men rushed from the huddled group to aid their fallen companions. Lindsey hurried to the first man and knelt beside him. She pushed his hair to the side and grimaced.
Logan.
Cora’s little bandits were correct.
His swollen face was blackened, and blood caked the back of his head. “Logan, can ye hear me? It’s Lindsey.”
His eyes fluttered. Moans of the injured men wafted around her. She jerked the basket to her side and brought out a flask of water, a soft cloth, and a jar of salve. “Look in my basket for more water skins,” she called over her shoulder to the other prisoners.
Logan’s friends, Adam, Thom, and Colyne lay unmoving. Dark dried blood and dirt smeared the men’s swollen, beaten faces. Their listless bodies attested to abuse and neglect.
“The commander takes delight in torturing them.”
Lindsey’s head snapped to the man who stooped beside her.
“Seems to hold a real interest in them.” He grabbed her basket and passed out containers to several others. They crowded around, snatching the bandages, salves, and potions she’d brought.
“Why?” she whispered. “What’s so special about them?”
The man squinted and indicated Logan with his head. “Collins couldn’t break him. I think that about drove the commander over the brink. He wanted to deliver information on the rebels’ stronghold to the king. Infuriated him that he failed to do so.”
The man bent over Adam and helped him sit.
While supporting Logan’s head, Lindsey held a flask to his parched, cracked lips and dribbled the liquid into his mouth. He sputtered, gulping at the water.
“Easy,” she said, giving him sips while she studied his disfigured face. “I’m here to help ye.”
One eye was swollen shut, the other barely open. His brown hair hung in filthy strands across his forehead, and a red irritated gash crossed his grimy cheek. She sat on the nasty hard floor and cradled his head in her lap. The medicinal salves would do little to heal him, but she had to try.
Her heart clenched. When she’d last seen him, the days spent with the fear of English hostilities and devastation as constant companions had not yet arrived. The soldiers had not yet destroyed her carefree way of life. They had not been concerned with the next raid or protecting the clan from enemy invasion. Instead, Lindsey and Logan enjoyed each other’s company, held the same love for horses, and had become fast friends.
He groaned. “Lindsey?”
“Aye, it’s me.” Her voice caught as she answered.
His good eye narrowed, and he grasped her wrist, his grip surprisingly strong for someone so battered. “What the hell are ye doing here? This is no place for ye, lass.”
“The Sassenachs are taking ye and yer men to the east coast in two days.” She spoke softly to him while dabbing his grimy forehead and bearded cheeks. “Yer caravan will not make it to the ship. Have faith. Stay strong. I have a plan.”


Who said life was fair? Certainly not Lindsey MacDougall. She rebels at a world dominated by men. Dressed in lad’s clothing, she manages her father’s stables, caring for, breeding and selling horses. Unwavering on performing her duty to the rebellion, Lindsey throws caution to the wind and secretly delivers missives behind enemy lines to the Scottish warriors.

Logan Ross uses his happy-go-lucky smile to warm the hearts of many willing lasses, but it also masks his pain—the pain of his birth. As a bastard son, he is unacceptable for any Laird’s daughter, including the spirited Lindsey MacDougall. However, she haunts his dreams. Determined to prove his worth, he throws himself into the middle of the rebellion, leading men into mortal danger.

After helping Logan escape from a brutal English dungeon, Lindsey fights her traitorous attraction to the virile highland warrior, vowing never to lose her heart to any man.