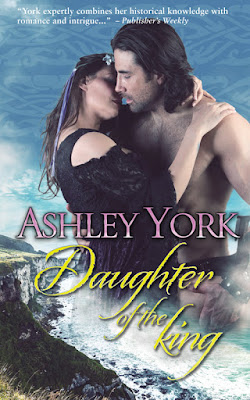 Our Medieval Monday Bad Boy/Villain theme has nearly ended. Here in our next to last installment is award-winning author Ashley York with DAUGHTER OF THE KING, Book Three in The Warrior Kings series. Be sure to comment to be entered in the drawing for a copy of her book week after next.

You can find my current snippet at Ashley’s blog today:www.ashleyyorkauthor.com/blog

A mistaken identity. A gruesome murder.

Trained as a warrior...

Brighit of Clonascra despises the trappings and demands of womanhood and is far more comfortable training for battle. Long held alliances require she set aside selfish dreams and take Darragh as her husband. The union intended to promote peace between the clans is interrupted by the shocking murder of a neighboring king and she quickly discovers there are far worse things than being wed.

Trained to be king...

Darragh of Drogheda has no wish to be king, but he is an obedient son and supports his father's plans. His marriage to Brighit, however, will be no hardship at all since he finds her most intriguing when she fights him at every turn. A she-warrior indeed. Her persistent dismissal of him merely blows the fire aflame and sets him down the path to discovery of all her most tightly held secrets—secrets that could cost him his life.

EXCERPT:
Seigine glanced at the men with him. When all nodded their agreement, he turned to face Tadhg again and said, “There was little choice. We must seek revenge. A leader is required.”

“Ye signed the treaty and we will give assistance as agreed.”

“I need only the blood of the man who killed my brother.”

Next week catch the end of Ashley’s longer excerpt on her blog at www.ashleyyorkauthor.com/blog