Medieval Monday: It's A Knight With Grace--and Laurel O'Donnell 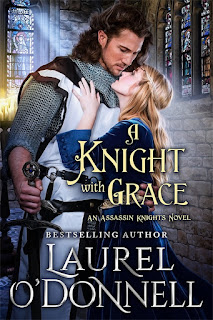 Please join me in welcoming the talented Laurel O'Donnell and her excerpt from A Knight With Grace. You'll certainly want to see what happens next week 😊

And for a peek at my latest excerpt from The Lady of the Forest, please visit Laurel's blog at www.laurel-odonnell.com.


Excerpt
She stood, pressing her fingers to her lips, gazing at him.
He clenched his teeth and looked away. “Grace...” That was when he noticed the blanket on the ground. He looked up at her. She had come to give him the blanket. The simple gesture warmed his heart until he remembered he had greeted her with violence, almost cutting her neck. “You should stay on your side of the camp.”

If you'd like to refresh your memory on what happened last week, Laurel was with Mary Morgan: http://www.marymorganauthor.com/

Lady Grace Willoughby defies her father’s orders to marry Sir William de Tracy and escapes with a friend. She has no intention of wedding a cursed man, a man ostracized from the church, a man who would only doom any future children they might have to the fires of Hell. She prays for a knight to rescue her.

Excommunicated and outcast for a horrible crime in his past, Sir William de Tracy searches for forgiveness. Marriage has never crossed his mind until Lord Willoughby commissions him to retrieve his fleeing daughter and honor the dying wish of his father by marrying Grace.

But things are not as they seem. And when an assassin tries to kill Grace, William must choose between his soul and the woman he has come to love. Can William and Grace overcome their past and find the redemption and love both are so desperately seeking? 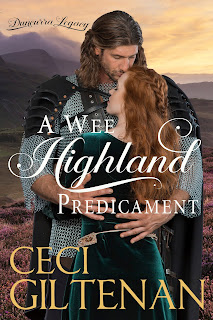 Today, I get to welcome Ceci Giltenan to Medieval Monday, along with her delightful book, A Wee Highland Predicament: A Duncurra Legacy Novel

(And if you're following along with my excerpt, you can find it at Ceci's blog:
www.cecigiltenan.com  Don't forget to comment for your choice of ebook at the end of the tour.)

He turned away from her, kneeling on one knee. “Put yer arms around my neck.” When she’d done that, he reached back, put his hands behind her knees and stood, pulling her knees forward around his hips. She was as light as he expected.

She gave a shocked gasp. “I’m not in the habit of wrapping my legs around strange men.”

“Are ye in the habit of getting yerself kidnapped?”

“Then it’s a night of firsts for ye. We’ll celebrate later. Hang on.”

Follow along next week on Cathy MacRae’s website: http://www.cathymacraeauthor.com/bits-n-bobs-author-blog. Remember to leave a comment for a chance to win an e-copy of A Wee Highland Predicament or another e-book of your choice by Ceci Giltenan.

Sometimes a bad boy can be a good man.

Lucas Grant’s brother is going to be furious. Lucas was supposed to secure a betrothal with a wealthy heiress to save his clan from financial ruin. After meeting her, he cannot marry the detestable woman.

As he flees Edinburgh to escape her, he happens upon six men who are holding a lovely Highland lass captive. He can’t just leave her to whatever fate awaits, so he rescues her.

When he learns the feisty lass he stumbled upon is Ailsa MacLennan, he sees another way to help his clan. He’s going to hold her for ransom.

But when she steals his heart, what will the ransom be?