First Encounters for Henry and Katherine from The Lady of the Forest: It's Medieval Monday 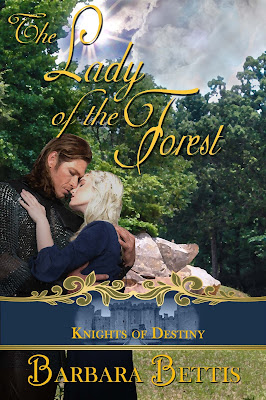 Medieval Monday wraps up its First Encounter Theme this week with a final installment of our excerpts, and I'm so excited to share Henry and Katherine's first encounter from The Lady of the Forest.
And if you'd like a chance to win an e-copy of the book, just leave a comment.
Thanks for following along with our posting for the past several weeks.

EXCERPT:
Indeed, perhaps he lied, used the name because of its familiarity in the shire. Perhaps she  noticed a resemblance because she wished the connection to be true. Nine long years had passed since last they’d met. And other men might bear similar scars.
Then she realized a way to confirm his identity. Something only three people in the world knew. Would he?
If she asked the question, he’d guess her secret.
The chance for help was worth it. Henry wouldn’t betray anyone. “Prove you are Henry of Chauvere. How did you come by that scar on your chin?
A sudden, dangerous stillness gripped the muscled warrior, and the sight of his bound legs dangling from the pallet didn’t seem as amusing.
His gaze bore into hers. Probing. Questioning.
If her heart thudded before, it thundered now. Mary’s tears. She refused to lose courage. Chin tilted, she glared back.
Finally, one side of his mouth twitched. The knowing look in his eyes told her he remembered.
“My young sister and her friend were trying out the pages’ wooden swords one afternoon. God only knows how they came by the weapons. I stepped in to halt their dangerous play and…”
When he paused, Kate couldn’t stop a chuckle.
“…my sister’s friend dealt me a blow.”
“It was an accident, you know.” Kate’s low voice sounded breathless.

BLURB:
He must pursue his enemy; she must protect her people. Can their love survive the duties that drive them apart?

When her elderly husband dies, Lady Katherine fakes her own death and disappears into the forest with others escaping the brutish new lord. Determined to protect her people, she knocks the wrong man senseless. But Lord Henry isn’t an enemy, he’s the brother of her childhood friend. Although his tender confidence tempts her, she’s bound by duty.

Henry of Chauvere has found the one lady he wants for his own, never mind she’s tied him hand and foot. When he learns the king has ordered her to wed Stonehill’s ruthless new master, he insists Kate seek haven with his sister. But she won’t desert her friends. Henry vows to solve her problem, provided he catches a traitor before the threat from Kate's past catches her.

When a daring rescue compels Henry and Kate to join forces, their attraction grows into love. If only duty didn’t drive them apart.