COVER REVEAL. Two books in award-winning author Jenna Jaxon's House of Pleasure series, Only Scandal Will Do and Only Marriage Will Do, have beautiful new looks for their upcoming re-release at Kensington. I so lucky to share them here today. Aren't they luscious? And Jenna has more surprises in store--next Tuesday, right here. He has the woman of his dreams, but what price will he have to pay to win her heart?
Kidnapped and sold at auction in a London brothel, Lady Katarina Fitzwilliam squelches an undeniable attraction to the masked stranger who purchased her, pits her wits against him, and escapes him and the scandal that would ruin her life.
Unable to resist temptation in a London brothel, Duncan Ferrers, Marquess of Dalbury, purchases a fiery beauty. She claims she’s a lady, but how can she be? No lady of his acquaintance in polite society is anything like her. Then he discovers she is who she says, and that this latest romp has compromised her reputation. He knows how that is. One more scandal and he’ll be cast out of London society, but he needs a wife who’ll provide an heir to carry on his illustrious family’s name. He seeks out Katarina, intending only to scotch the scandal, but instead finds his heart ensnared. He’s betting their future he’ll capture her heart, but does he have what it takes to win the wager?
WARNING: A blade-wielding heroine who crosses swords with a master of sensuality.
Buy Link for Amazon 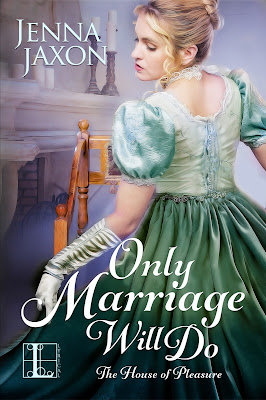 Not every happy-ever-after begins at “I do.”
When the man of her dreams rescues Lady Juliet Ferrers from the villain claiming to be her husband, she is sure she has found her one true love. But is she free to marry him? Not to be deterred, Juliet arranges for her hero to escort her to her family estate in far off Northern England—hoping that along the way she can win his love—and his hand…
Captivated by Juliet’s sweetness and beauty, Captain Amiable Dawson can’t help but be spellbound by the promise of a life with her. But the spell breaks when questions arise about her marital status. Soon the upstanding Amiable is unsure if he is indeed married to Juliet. And when his rival absconds with her, Amiable must choose between the law of the land and his heart’s desire to rescue Juliet once more…
Buy Link for Amazon

AND for comparison, here's the third cover in Jenna's House of Pleasure trilogy, Only A Mistress Will Do. 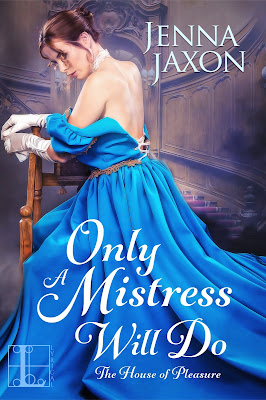 The man of her dreams . . . belongs to another woman.
Destitute and without friends, Violet Carlton is forced to seek employment at the House of Pleasure in London. She steels herself for her first customer and is shocked when the man rescues her instead of ravishing her. A grateful Violet cannot help but admire the handsome Viscount Trevor. But she must curb her desire for the dashing nobleman she can never have because he is already betrothed to another . . .
Tristan had gone to the House of Pleasure for a last bit of fun before he became a faithful married man. But when he recognizes the woman in his bed, he becomes determined to save her instead. Now, his heart wars with his head as he falls for the vulnerable courtesan. Unable to break his betrothal without a scandal, Tris resolves to find Violet proper employment or a husband of her own. Still, his arms ache for Violet, urging him to abandon propriety and sacrifice everything to be with the woman he loves. . . .
Buy Link for Amazon.
Posted by Barbara Bettis at 9:44 AM

Email ThisBlogThis!Share to TwitterShare to FacebookShare to Pinterest
Labels: Cover Reveal, England, historical romance, House of Pleasure Series, Jenna Jaxon, Kensington, Only Marriage Will Do, Only Scandal Will Do, Regency romance