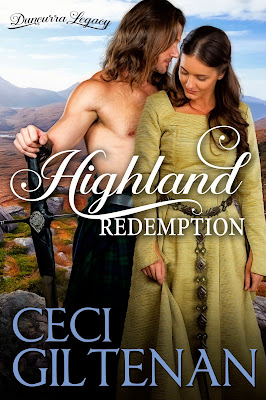 It's Week 4 of Medieval Monday's First Encounter themed  posts and I'm happy to welcome another newcomer to the group. Ceci Giltenan brings us a glimpse of HIGHLAND REDEMPTION, the first in her Duncurra Legacy series. Here's her excerpt.

And don't forget to leave a comment for a chance to win an e-copy of Highland Redemption or another e-book of your choice by Ceci Giltenan at the end of the theme tour.

To catch up on last week's excerpt from Ceci, check out Mary Morgan's blog: http://www.marymorganauthor.com/.
Excerpt:
"Oh, I agree. I can’t imagine not having a name for my horse.”
“Do you have a horse?” asked Tomas.
Her face lit up. “Yes. A black mare. I named her Mab, after the fairy queen.”
“Really?” Tomas was shocked. “I named my first pony Mab.”
“You’re teasing me.”
“Nay, I’m serious. An older girl in the clan had told me fairy stories and Mab was always in them.”
“What an odd coincidence. I’ve never heard of another horse named Mab. Even when I named her, some of my more superstitious clansmen warned me that I might be tempting the fairies to work some mischief.”


Blurb:
Tomas's life changed forever when at the age of seven he was adopted by Laird and Lady Maclan ending the abuse he'd suffered at Ambrose Ruthven's hand. He'd never looked back and never intended to.
But fate had other plans...
Now, nineteen years later, he runs headlong into his past. The Ruthvens are in trouble and Tomas is in a position to help them. But can he set aside his hatred for Laird Ruthven for the good of the clan into which he was born?
Fate always adds a twist...
Laird Ruthven's daughter is not what Tomas expected. Vida Ruthven is sweet, smart, and utterly irresistible.
Now, Tomas must choose between being the savior or taking the ultimate revenge.
Buy Link: https://www.amazon.com/Highland-Redemption-Duncurra-Legacy-Novel-ebook/dp/B071NL216N


Follow along next week on Cathy MacRae’s website: http://www.cathymacraeauthor.com/bits-n-bobs-author-blog.
You'll find my First Encounter excerpt from The Lady of the Forest at:   https://cecigiltenan.com/
Posted by Barbara Bettis at 9:57 PM 2 comments

Nicole Locke and HER CHRISTMAS KNIGHT, from the Lovers and Legends Series 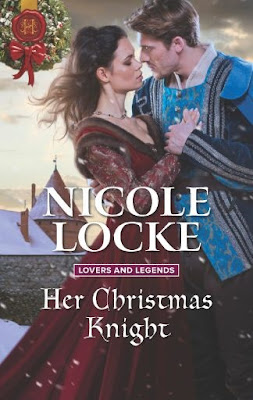 Today we welcome a newcomer to Medieval Monday, Nicole Locke. Nicole brings us an excerpt from Her Christmas Knight, one of her Lovers and Legends series.
So glad you're here, Nicole!

Excerpt:
Even if she didn’t know and couldn’t see where she was going, she’d thought she could depend on her ears to hear the lapping of the Thames or the running of the other seal seekers. But her ears had failed her. All was dead silence.

She rolled the seal in her hands, hoping the unusual shape would distract her from her thoughts. The seal was neither round nor square, and it was much too large for her hands, but it had to be the correct seal. She was sure that she’d understood the riddle: Find the door that holds the light.

A door couldn’t hold a light unless there was a light behind that illuminated it, and yet she had opened so many doors and there had been only more darkness.

Her breathing hitched. She mustn’t think about her fear of darkness. She must consider only the light and where she hadn’t been. If she concentrated on the riddle maybe she could forget the dark. Maybe.

Blurb:
A knight to protect her—this Yuletide
By order of the English king, Alice of Swaffham searches London nobility for the traitor dealing information to the Scots. Little does she know that the mysterious spy she seeks is the man she once loved and thought she'd lost forever…

If Hugh of Shoebury felt unworthy of Alice before, as the Half-Thistle spy he can never claim her heart. Now he must fight to keep not only his dark secrets—and Alice—safe from a vengeful king…but also his burning longing for her at bay!

Next Monday, Nicole is at Cathy MacRae’s blog. http://www.cathymacraeauthor.com/bits-n-bobs-author-blog
# # #

**Check out my excerpt at Nicole's blog today. If you comment, you'll be entered to win a copy of my The Lady of the Forest, awarded at the end of this blog hop tour.  http://nicolelocke.com

Posted by Barbara Bettis at 1:44 AM 2 comments 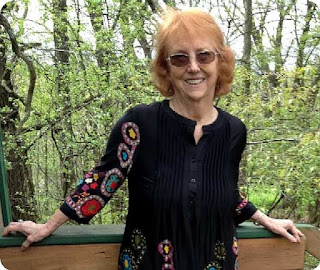 What's better than a book on sale? A book on sale and a yummy cookie recipe. C. J. Fosdick's award-winning time slip American historical The Accidental Wife is only 99 cents throughout August. And she's sharing a modern cookie recipe her heroine had to improvise when she finds herself in 1886.

Authors often share a brain with their heroines.  My favorite heroine, Jessica Brewster is taller and slimmer than me, but we both have the same red hair, brown eyes, penchant for drama and taste for cookies. When Jessica participates in a living history tea party at Old Ft. Laramie with her late grandmother’s mysterious teacup, she never imagined she would actually become living history—in the shoes of her look-alike great great grandmother.


Fending off her ancestor’s charismatic first husband and raising her nine year old great grandmother are only two of the challenges she faces in 1886 while learning to cook, launder and survive the bias and dangers of homestead life in Wyoming.  Her charade in The Accidental Wife grows complicated when the transformative power of love takes hold, and her ancestor’s wayward brother shows up with dark secrets of his own. In a cabin poker game, Jessica offers her famous chocolate chip cookies as poker chips.  (Since chocolate chips were not invented until 1937, she finds a way to improvise.)


Baking anything in a cast iron woodstove is a challenge to a well-educated single woman of the 21st century who often relied on take-out or the convenience of popping frozen meals into a microwave. Woodstoves couldn’t regulate baking temperatures well enough to produce cookies, but creativity is also the mother of pre-invention in a time slip. Jessica’s version of our most famous cookie uses a pocket watch and broken bits of chocolate bars bought at the Ft. Laramie trading post. In the end, Jessica’s ingenuity wins love and legacy in the poker game of life.


The Accidental Wife began life as an award-winning short story. The Accidental Stranger is the sequel to Jessica’s timeless journey with “…a fanciful twist on its genre,” according to Kirkus Reviews. Until August 31, the eBook of The Accidental Wife will be on sale for the first time at .99 at most on line bookstores.


Since Chocolate chips were not invented until 1937,
time-traveler Jessica Brewster in “The Accidental Wife”
improvises this recipe found in her ancestor’s 1886 cookbook!

Connect with Cj in her monthly Newsletter for other recipes & special offers! 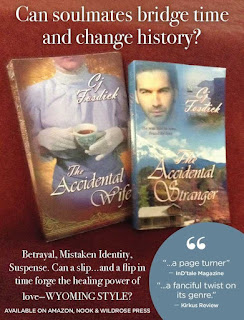 He rose from the chair like an old man and touched my face with both hands, feathering his fingers lightly across my forehead, into the wells of my eyes, over my nose and cheekbones, like a blind man needing to know who stood before him. I tried not to stiffen at his touch, willing myself not to blink, not to release the fresh tears that had begun to pool. He collared my throat with his long fingers and ran a thumb over my lips. “I want my wife back. Come back to me, Mitawin,” he whispered.

The word on the teacup; the hallmark of my deceit. Our eyes locked, and I felt my throat closing and my knees begin to quiver. For a few seconds his grip tightened around my throat, and I clamped my eyes shut with a fleeting thought. Yes, take my breath...end this tormenting deception.


When Jessica Brewster inherits a mysterious teacup, she finds rubbing it transports her back to 1886, trading places with her look-alike great grandmother—wife to her ancestor’s magnetic first husband and mother to his charming young daughter. True love, a gypsy, and her ancestor’s troubled brother amp up the charade she’s playing. Is her future in the past? Her life hangs in the balance


Born and raised in Packerland, Cj moved west to the medical mecca in Rochester, MN where her writing career bloomed with published award-winning stories and articles to her novel series inspired by Diana Gabaldon’s Outlander. Rescued horses, dogs, cats, children and one patient husband have motivated the heart of Cj’s craft. Though living on a country hilltop haven for decades, she has ventured down on occasion to climb a Jamaican waterfall, float in the Dead Sea, kiss the Blarney Stone and research settings for her next novel.

Posted by Barbara Bettis at 1:00 AM 18 comments