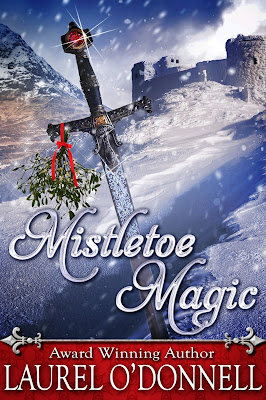 On Medieval Monday, the Christmas Holiday continues with a special treat from award-winner author Laurel O'Donnell, who shares a scene of Yuleide from her terrific story, Mistletoe Magic.

Yuletide. It had always made Jaclyn Fainwick excited and happy with the potential of what the future held. This one day, amongst all the rest, was when every hope, every dream could come true. She loved this day above all the rest in the year.

She sat before the hearth in the Great Hall, waiting for the festivities to begin, swinging her feet back and forth. She had been waiting for most of the day. Her father would come, and her mother, and her brother. All the people she loved would be together on this day. No matter where they were or what they were doing, they would always gather together on the Yuletide.

She twisted and looked behind the large wooden chair she sat in. The shadows at the back of the Hall were getting long as the sun set, stretching dark fingers into the Great Hall. But no one was coming. She turned back and clutched her hands in her lap. If she were very good, her father would bring her something wonderful. A strand of her long dark hair had pulled free of the braid at her back and she swatted it back in place.

The flames danced in the hearth, warming her. She had been alive for ten Yuletides, this would make her eleventh, enough to know that the Yule log would soon be burned. It wouldn’t be long now.

Around her, the servants cleared the tables from the feast. A dog rushed beneath the table to gobble up a scrap of the duck that had fallen.

Her stomach lurched with excitement and Jaclyn turned to see her friend, Alexander, run into the Great Hall, followed by her brother, Paul. She sat back in disappointment. Alexander reached her side first, skidding to a halt on the rushes.

“I told you she’d be in here,” Paul said, stopping at her other side. He was out of breath as if he had run a far distance. His brown hair was in a disarray on his head; his blue jupon was askew, his black boots dirty.

Alexander looked at her and grinned.

Jaclyn's heart lurched at his twinkling blue eyes, as it always did. Even at thirteen summers, Alexander was the most handsome boy she had ever met. His blonde hair reached to his shoulders and always had just the right amount of wave to it. He was not dressed as nicely as Paul, but he carried himself with more confidence. He usually wore a leather vest and black leggings, the same he was wearing on this Yuletide.

He met her gaze. “Your father is coming,” he said with restrained exuberance.

She turned in her chair to face the door.

“I was going to tell her,” Paul complained.

It didn’t matter who told her. Outside the door in the hallway, Jaclyn heard heavy footsteps. It sounded like the entire village was with her father! She could barely sit still in her exhilaration. A moment skipped by and then her father appeared. He was the tallest man of all the men following behind him, his shoulders broad, his hair dark. He was surrounded by knights and villagers. They entered the hall behind him as he walked toward her.

She stood to greet him.

“My dove,” he whispered and greeted her with a hug.

He pulled back to look at her. “Before we light the Yule log, I want to give you this. You have been a very good girl this year, and a wonderful daughter.” He held something out to her.

Jaclyn hadn’t noticed he was carrying anything. She looked down to see he was holding a branch with green leaves and white berries. She gasped, “It’s beautiful!” and took the branch from his hand.

“The berries reminded me of the winter snow,” her father said softly.

Jaclyn nodded. “But the green leaves belong in the summer!” She looked up at him. “The trees have long since lost their leaves. Where did you find it?”

Her father smiled and nodded. “That’s why I brought it to you now. Keep it safe, child.”

Jaclyn nodded and hurried through the villagers and gathered guests. She paused to glance back at her father. He was silhouetted before the warm hearth fire, his arms on his hips, watching her. She curtseyed slightly. “Thank you, Father.”

He dipped his head in a nod.

Jaclyn knew the perfect place to keep it safe. The perfect spot for it. She raced to her room and flung a cloak about her shoulders. She paused to stare at the branch. It was amazing. Summer and winter, all rolled up into one glorious plant. She gently touched one of the berries.

A confident knight arrives home to find his childhood friend grown into much more than he remembered. The lady of the castle keeps a dangerous secret that threatens all she holds dear. Will Mistletoe Magic save them?